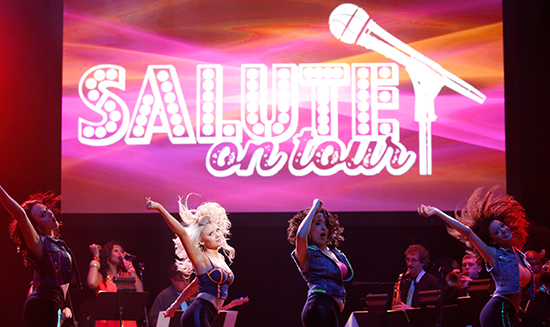 Every year the NCAA honors the men’s and women’s Final Four basketball teams with a celebratory event called Salute to kick off the last stage of the tournament. In coordination with the custom-designed championship logo and look for that year, the Salute identity includes signage applications, tickets and program in a style unique to the location. The first year I worked on the Men’s Salute I brought another designer’s vision for a keepsake to hold the program booklet to life by engineering the die-cut file, applying the look and making mockup after mockup to ensure the piece folded seamlessly with a reveal of the interior booklet. The client was so happy with the compact keepsake they requested the new logo and look be applied to it the following year.

I also worked as lead designer on several years of Women’s Salute—the most memorable being the logo and look created for a championship in Nashville inspired by the intersection of Hatch Show Print letterpress shop and the country music scene. The year’s Salute identity tied in heavily with the overall Final Four look but leaned more heavily into the music instead of athletics.